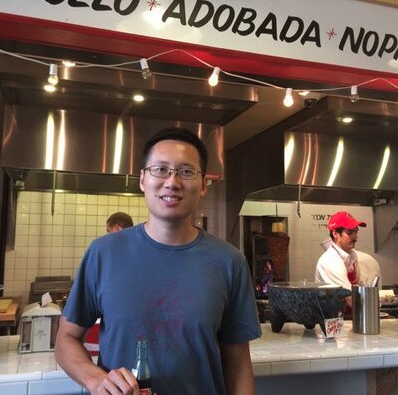 
If you are interested in running the code I used for this analysis, please check out my GitHub.

The following example walks through a very basic logistic regression from start to finish so that I (and hopefully you, the reader) can build more intuition on how it works.


Let’s say I wanted to examine the relationship between my basketball shooting accuracy and the distance that I shoot from. More specifically, I want a model that takes in “distance from the basket” in feet and spits out the probability that I will make the shot.

First I need some data. So I went out and shot a basketball from various distances while recording each result (1 for a make, 0 for a miss). The result looks like this when plotted on a scatter plot:


In linear regression, the output Y is in the same units as the target variable (the thing you are trying to predict). However, in logistic regression the output Y is in log odds. Now unless you spend a lot of time sports betting or in casinos, you are probably not very familiar with odds. Odds is just another way of expressing the probability of an event, P(Event).


So if they basically tell us the same thing, why bother? Probabilities are bounded between 0 and 1, which becomes a problem in regression analysis. Odds as you can see below range from 0 to infinity.

Notice that the middle section of the plot is linear

We can write our logistic regression equation:


Now that we understand how we can go from a linear estimate of log odds to a probability, let’s examine how the coefficients B0 and B1 are actually estimated in the logistic regression equation that we use to calculate Z. There is some math that goes on behind the scenes here, but I will do my best to explain it in plain English so that both you (and I) can gain an intuitive understanding of this model.


Like most statistical models, logistic regression seeks to minimize a cost function. So let’s first start by thinking about what a cost function is. A cost function tries to measure how wrong you are. So if my prediction was right then there should be no cost, if I am just a tiny bit wrong there should be a small cost, and if I am massively wrong there should be a high cost. This is easy to visualize in the linear regression world where we have a continuous target variable (and we can simply square the difference between the actual outcome and our prediction to compute the contribution to cost of each prediction). But here we are dealing with a target variable that contains only 0s and 1s. Don’t despair, we can do something very similar.

In my basketball example, I made my first shot from right underneath the basket — that is [Shot Outcome = 1 | Distance from Basket =0]. Yay, I don’t completely suck at basketball. How can we translate this into a cost?

So for a given observation, we can compute the cost as:

And for our entire data set we can compute the total cost by:

This total cost is the number we want to minimize, and we can do so with a gradient descent optimization. In other words we can run an optimization to find the values of B0 and B1 that minimize total cost. And once we have that figured out, we have our model. Exciting!

Tying it All Together


To sum up, first we use optimization to search for the values of B0 and B1 that minimize our cost function. This gives us our model:


We can take a look at our slope coefficient, B1, which measure the impact that distance has on my shooting accuracy. We estimated B1 to be -0.2. This means that for every 1 foot increase in distance, the log odds of me making the shot decreases by 0.2. B0, the y-intercept, has a value of 2.5. This is the model’s log odds prediction when I shoot from 0 feet (right next to the basket). Running that through the sigmoid function gives us a predicted probability of 92.4%. In the following plot, the green dots depict Z, our predicted log odds.

We are almost done! Since Z is in log odds, we need to use the sigmoid function to convert it into probabilities:


Probability of Making Shot, the ultimate output that we are after is depicted by the orange dots in the following plot. Notice the curvature. This means that the relationship between my feature (distance) and my target is not linear. In probability space (unlike with log odds or with linear regression) we cannot say that there is a constant relationship between the distance I shoot from and my probability of making the shot. Rather, the impact of distance on probability (the slope of the line that connects the orange dots) is itself a function of how far I am currently standing from the basket.

Nice! We have our probabilities now

This content was originally written in the following article Understanding Logistic Regression and was literally translated into spanish by the DataSource.ai team with the permission of its original author Tony Yiu and you can find this person's profile at the following link Tony Yiu . This post was translated by: Juan Guillermo Gomez